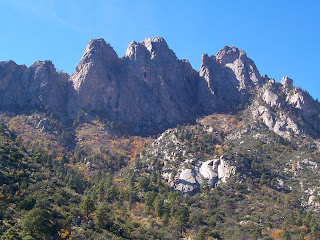 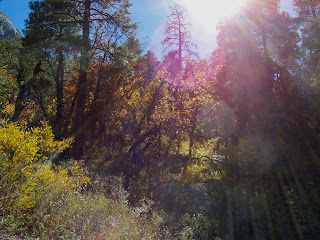 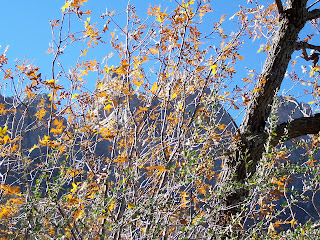 I had several misadventures trying to find my way into Indian Hollow during the first few years I lived in Las Cruces. One hiking guide book had us starting out at a pullout a short ways east of the group use area. We went cross country over a hill, across a cattle pasture and eventually ended up at a fence as we struggled through the brush. Another book had us branching off the southwest corner  of the Pine Tree Trail, going high on the slopes and then dropping down into, a brushy, rocky drainage.When we came to a high waterfall we had to climb up the slope just to continue our way down, and in the process  found  an actual trail on a dividing ridge. I fell hard on the ice high in the canyon on that trek, but at least now I knew a trail existed- and where it began because I followed it all the way back to the group camping area. Now things aren't so hard.There's one of those yellow  WARNING signs on the south side of the group area  parking lot at Aguirre Springs that will clue you in to where the trail is. It goes through the fence and continues down the arroyo before taking you up the slope on the south side. There is a section that goes over some bare rock as it sidehills toward a bouldery pass where one has to perform some minor climbing on bare rock.This part of the trail might seem slightly daunting to those less experienced. It does get better. After going over a saddle where there is a large vein of rusty quartz, it continues along  the side of the hill, up and down and in and out of some minor drainages. At  one of these it may be easy to lose the trail,unless there are some thoughtful cairns  to guide you.Just keep a southwest bearing, and you'll probably find the trail again. 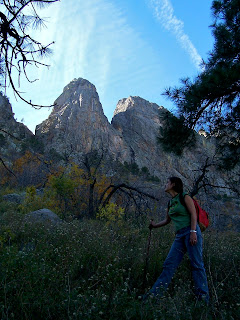 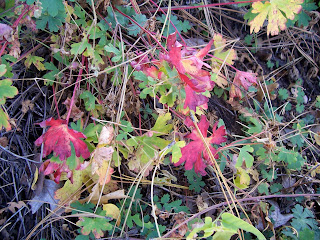 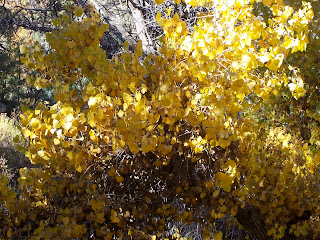 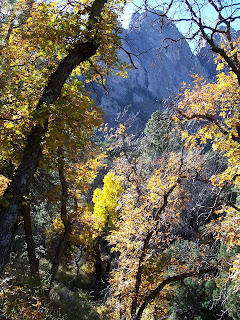 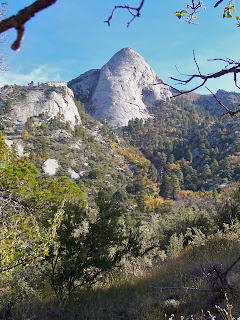 Eventually the trail parallels and then crosses the major stream bed out of Indian Hollow and begins to climb very steeply on a dividing ridge.There are many small delights along the way especially if there is running water. In the fall, it's fun to get a peek at some of the very few aspens in the Organ Mountains. They grow in a gully on the northeast slope of Sugarloaf Peak. I've taken the short but somewhat treacherous side trip several times to get a closer look. The trail keeps going higher and higher, steep, then steeper on loose granite grus that's even less fun to walk on on the way down.At the highest point amongst the pines, Gambel's Oaks, and Douglas Firs,  I've frequently heard voices high up on the exfoliation dome known as Sugarloaf. I've also seen the climbers,so tiny, on the gray-white stone maneuvering their way to the top.  From this highpoint the trail continues down hill to cross a branch of the creek and then enters one of the most enchanted areas of the Organs. There are large pines that we've picnicked under. A few huge old cottonwoods, that dazzle in the fall, lie along  the stream which frequently has water. Organ Needle and the other high peaks seem tantalizingly close, but just out of reach.The trail continues back following the other branch of Indian Hollow,but eventually just peters out in the cool shadows of the ridgeline. Once we followed some old cairns, there was no tread, and somehow scrambled back to the Pine Tree Trail. It wasn't easy or particularly fun, although we did see some fantastic waterfalls that literally gushed right out of the rock.It's a toss-up between this trail and Fillmore Canyon as to which is my favorite. Both used be to be enjoyed in perfect quiet as well,but the last time we came through here, we met a woman with unfriendly,unleashed dogs( she didn't have a leash either) and had to listen to some geocachers shouting at each other every time they lost the trail, which was frequent enough that I was tempted to walk back down and guide them just to not have to listen to them. Oh,well I guess I was in their shoes once, I just didn't do a lot of shouting. 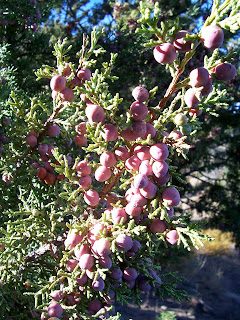 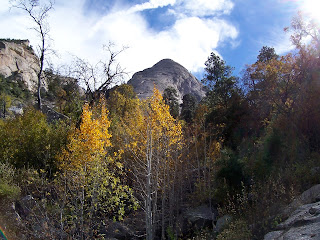 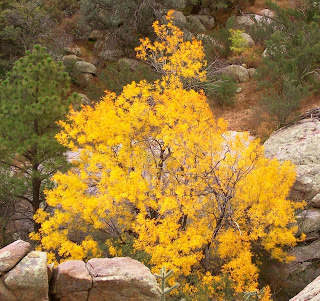 Posted by Devon Fletcher at 6:41 PM

It there any way that Indian Hollow and Filmore Canyon connect?

Depends on what you mean by "connect." You can go up over the dividing ridge at the very back of Fillmore. It's very steep, and not particularly fun.Then come down the very, very steep east side into Indian Hollow. I've been up to that ridge,but never arranged for a shuttle so that I could go over. You're looking at a 7-8 mile hike( one way) with close to 2500 feet of elevation gain. It's doable,but I would give myself at least 6 or more hours to do it. Fillmore is a very nice hike just by itself, as is Indian Hollow.

We made it up and over today. It was very, very hard for about an hour and a half - included some crawling up and a bit of whining on my part. There was no trail or at least we never found one until we got up to the ridge just before the saddle and we found a cairn. We did flag where we went just in case we didn't make it and had to turn around. We left the Acquirre Springs group campground at 8 am and were at the saddle at noon. It was tough but my friend and I made it (I'm 50, not in the greatest shape but we've been hiking for years and she is ~65 and in better shape than I). We were at Dripping Springs La Cueva group area at 3 pm. So 7 hours that included about 1/2 an hour at the top for lunch. Feel quite good now:). Glad we did it on a beautiful cool morning and glad we missed the bad winds this afternoon. Weather wise we were lucky!

I should correct this - we followed Indian Hollow trail as far as we could and then struck out west ward toward the saddle. That is where we left pink flagging on some of the trees.